The Art Loeb Trail is 30.1 miles in length and totals around 9,000 feet of ascent and descent respectively. Scott, Jobie, Mark, and I would be traversing from north to south, which had a little over 8,000 feet of climbing and 9,000 feet of descent. Strava data with elevation profile and cliff notes of important info including water sources at the bottom of the post. Traveling north to south allowed us to get more of the difficult navigating out of the way first. The first nine miles of trail goes through the Shining Rock Wilderness and are unmarked due to being a wilderness area. We would also have the luxury of running directly back to our campsite at Davidson River. About to head out from Daniel Boone Boy Scout Camp. Photo- Jobie Williams

We got a later than ideal start, around 10:30 am, from the Daniel Boone Boy Scout Camp. We lingered around camp that morning without a sense of urgency, and the drive from Davidson River Campground took a little over an hour. A discussion broke out on the drive over whether we would need headlamps or not. The days are longer now. And it’s ‘just’ a 50k. We should be fine. Mark was the only wise one to pack his.

Everything is wonderful 10 steps in. Photo- Daniel Lucas

We said our goodbyes to Billy and Daniel who would be heading back to do some hiking around Black Balsam Knob and Tennent Mountain. Unfortunately, they were nursing some injuries and wouldn’t be joining us for the 30-mile trek.

The first four miles were a steady climb of 1,500 feet along secluded single track. We all settled into a nice hiking pace and came upon a group of backpackers at the base of Cold Mountain before we knew it. The backpacking group of seven was a part of the Outdoor Academy and being led by a single instructor. We pointed out which trail would take them up to Cold Mountain upon their inquiry. It was the job of the six students to navigate, and their instructor seemed slightly disappointed that they asked us for directions. To which they quickly responded that they were just using their resources. One guy in the group could have passed as Scott’s younger twin.

The next five-mile section steadily climbs and follows the ridge through the Shining Rock Wilderness. It was nice having Mark with us who was familiar with the trails, and we navigated the somewhat tricky sections with ease. We were afforded some gorgeous views along the ridge from a few rock ledges.

After leaving the Shining Rock Wilderness, there is a brief section of trail with views of the mountains on either side. This is a short preview of the serene views to come from atop Tennent Mountain and Black Balsam Knob. The expansive views were quickly replaced by the trees as we started the climb up Tennent Mountain. I was leading the climb up with Mark close behind. There was an unmarked fork of the trail where I stayed left. I kept going and reached Tennent Mountain and then realized Mark, Scott, and Jobie were no longer behind me. Tennent Mountain is a grassy bald, so I could easily see the trail leading up to the mountain. Mark arrived about a minute later, but Scott and Jobie were nowhere in sight. Mark said he had not seen them coming up behind him.

Me- “They should be up soon. Do you think they took a wrong turn?”

Mark- “Um, maybe. But it all leads up here so they should be here eventually.”

We waited for about 15 minutes and thought that Scott and Jobie had gone down to the spring just off the trail. So we made our way down to the spring, refilled our bottles, and still no sign. Mark and I debated if they had kept going or were waiting for us somewhere. We decided to circle back on the trail in hopes that they were behind us and finally ran into them. They had stopped for a Jobie photoshoot and a sandwich break. Reunited and no longer concerned if day hikers had been accosting them over their short shorts, we pressed on for the second half of the run.

The first 12 miles included big views and many technical sections that were not entirely runnable. It was hard to get into a rhythm due to these technical sections and stopping to admire the views didn’t help either. The rest of the trail was predominately forested single track that looked relatively harmless on the elevation profile I was carrying in my pocket. There were two 1,000 foot plus descents with a lot of little bumps that I harmlessly described as rollers. The terrain, according to Mark, would also become less technical. All of these factors led us to believe that we would soon settle into a rhythm of challenging yet runnable terrain until we arrived back at Davidson River. The mountains took note of our lax attitude and delivered in kind for the final 18 miles. 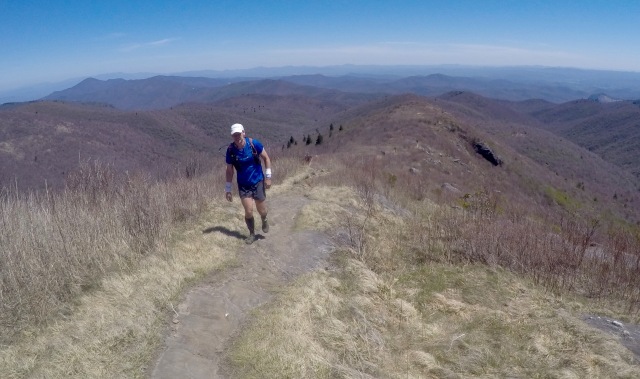 Being above 5,000 feet, we enjoyed a brief section of trail through a spruce and fir thicket. We then quickly started big descent number one. The descent was super technical and switch-backed all the way down to the Blue Ridge Parkway. We could see cars driving along the Parkway way down below as we descended, which put into perspective how quickly the trail dropped off the side of the mountain. The trail continued to drop after crossing the Parkway and became thickly littered with leaves for the next few miles. The trail was easy to follow, but the heavy leaf litter caused somewhat precarious footing and prevented us from truly taking advantage of the runnable grade.

We finished the long descent and began the first little “roller” of a climb. Note to self, climbs of 500 feet in half a mile are not rollers.

Water is not frequent along the Art Loeb, but there are a few springs spaced about 8 miles apart throughout the length of the trail. After the half-mile climb, we quickly dropped down to the Deep Gap Shelter and refilled on water at a questionable spring. It was a dirt ridden trickle that I passed on drinking until arriving at a better spring at Butter Gap. We could see the huge climb that awaited as Pilot Mountain jutted up directly in front of us. We dropped down into low gear and began the power hike up. The trail perfectly switch-backed up the mountain and reminded me of all the hard work that goes into creating trails in such steep terrain. The peak of Pilot Mountain had beautiful views off both sides. There is a great view of the iconic Looking Glass Rock to the east, while the mountains undulated seemingly forever in their hazy hue to the west. A quick glance at the elevation profile told us we were about to head down big descent number two, which lost almost 2,000 feet of elevation over two miles. View to the west. 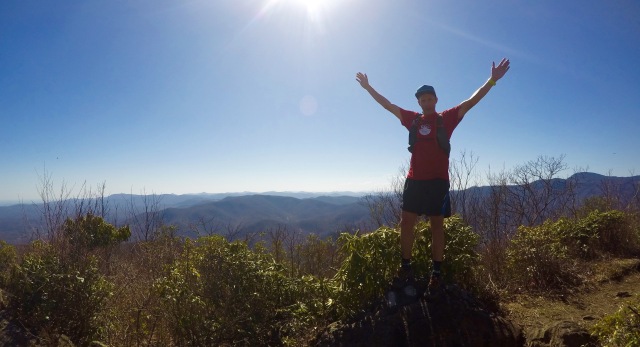 “I love the Art Loeb Trail this much!”

The leaf litter wasn’t as bad as before, and we could manage somewhat of a quicker turnover going down. We actually passed another runner and his dog going in the opposite direction taking on the Art Loeb in a single day. Realizing the time of day and the need to keep moving, none of us chatted for long and carried on.

We now had about 13 miles to go upon reaching the bottom of Pilot Mountain. The remaining half marathon was a net downhill with a few climbs thrown in. Everybody seemed to still be in good spirits but had switched into finish mode. Mark was a little less cheerful and was taking extended breaks from his usual permanent smile. Scott was no longer referencing a movie or TV show every mile. And Jobie’s camera remained stashed in his pack. Art Loeb had us right where he wanted us.

Are we there yet?

We passed a lot of backpackers for the next few miles heading up the trail as we were shuffling down. Seeing a backpacker carrying enough stuff to last for a week with a look of disgust and struggle on their face always brightens my mood, admittedly somewhat sadistically, knowing my little vest of food and water is infinitely lighter.

Butter Gap Shelter marked our last reliable source of water and eight miles to go. There was a large pack of Boy Scouts setting up camp for the night as we pulled water from a pipe. We took our time getting enough water to last us for the final push. I can’t recall our conversations but do remember thinking that we seemed a little drunk and delirious. Scott had another movie reference left in him.

Scott- “We are chipping away at this thing like Shawshank.”

The elevation profile indicated a few more of those “rollers” and one biggish climb left. There was nothing rolling about those last eight miles. It was up and down, with the ups being quite steep. After a few miles, I stopped at a trail intersection to wait on Scott and Jobie. Mark said he was gonna keep moving. The long descents were zapping his quads. I had the elevation profile out studying the remaining five miles hoping against common sense that we were closer to finishing than we actually were. Scott and Jobie shuffled in with fatigue fully set in on their faces.

Scott- “What ya thinking? How much more left?”

Me- “I’m trying to figure out if we have started the last big climb or not.”

Jobie- “What do you mean last big climb?”

We pressed on and soon after Scott hollered that Jobie needed to sit down for a second. I was getting a little worried if we would make it back with enough light and wondering if an epic bonk was stirring for Jobie. I decided to keep going so I could grab some headlamps at camp and meet them back up the trail with some Coke for fuel if they had to death march the final four miles.

I soon passed Mark who was trudging along. The last four miles would have been really fun to bomb on fresh legs. I made it back to camp about an hour later with a little bit of daylight left.  Billy was working on an awesome fire, while Daniel was cooking up a feast. I grabbed some lamps to meet the guys back on the trail hoping they would not be needed.

Luckily, they all marched in minutes apart after I drove the short distance from our campground back to the trailhead. There was little jubilation in finishing. Just utter relief to be done.

We got back to camp and Billy couldn’t wait to hear stories of the suffer-fest. Jobie (Joe-Bee as Billy pronounces it) had many words, none too glowing, to describe the Art Loeb Trail. Billy listened the whole time with a wide grin on his face.

Glad to be back at camp. Photo- Jobie

The rest of the night was filled with some of the best food I have ever had. The beet salad, pan-seared avocado, sweet potato soufflé, wild Alaskan salmon, and steak filet quickly lifted our spirits. Daniel enjoys cooking and really spoiled us. Breakfast the next day. Photo- Jobie

All in all, it was an unforgettable weekend with friends in the mountains. Good conversation, excellent food, and a humbling experience that only the mountains can offer.

1 Response to Running the Art Loeb